The area of ​​the Pallars is the border that marks the beginning of the highest peaks of the Pyrenees, (3000m). A place where only the species that survive the most adverse conditions, in the heights: alpine meadows, a world of rocks and eternal snows live. A little further south, we find the pre-Pyrenees, with less altitude, is a drier and sunny region, in Catalonia, where a privileged climate remembers its Mediterranean influence. Here the mountain shows several faces: we stop, terraced culture with dry stone walls, abrupt ravines inhabited by all types of raptors, wild pine area and small villages built with stones and slates ... The main center of interest of the region is the town of Gerri de la Sal, its name is attributed to the presence of a salt water source, water that crosses the subsoil layers salted to bloom on the outside. The water of the spring was carried by pipelines made of pine to the salification tables, so that later, the evaporation of the salt was carried out. Activity that is documented since the 9th century, of which currently only a small craft production. The testimony of its rich past is the abbey (Benedictine) of the twelfth century, the Romanesque bridge of the eleventh century, the medieval town (a set of old houses that give the narrow streets labyrinth shape), the "house of salt" (Where salt was stored) the prison tower, and of course, its salt water distribution systems and salt production. The gastronomy of the Pallars is rich and varied: a large number of cheeses, sausages, a diverse vegetable garden and some sheep breeds and native reel. Hunting and pork products are the most abundant, including the typical Girella, made with lamb meat and egg. How do we teach you? Impregnated by the aromas of thyme and rosemary, we will enter this magnificent region in order to enjoy a small village abandoned at 1300m altitude. We will settle in a comfortable country house, in a privileged environment, where we can watch the spectacle right before us of all the carrioners of Europe: up to 20 vultures, griffon vultures, black vultures and from March to September, alimoches. Pirenalia carries out several activities in this area: Wildlife watching trips: https://www.pirenalia.com/en/tours/the-magesty-of-the-pyrenees-deer-and-lammergeyer https://www.pirenalia.com/en/tours/birds-of-the-steppe-lammergeyers-and-vultures 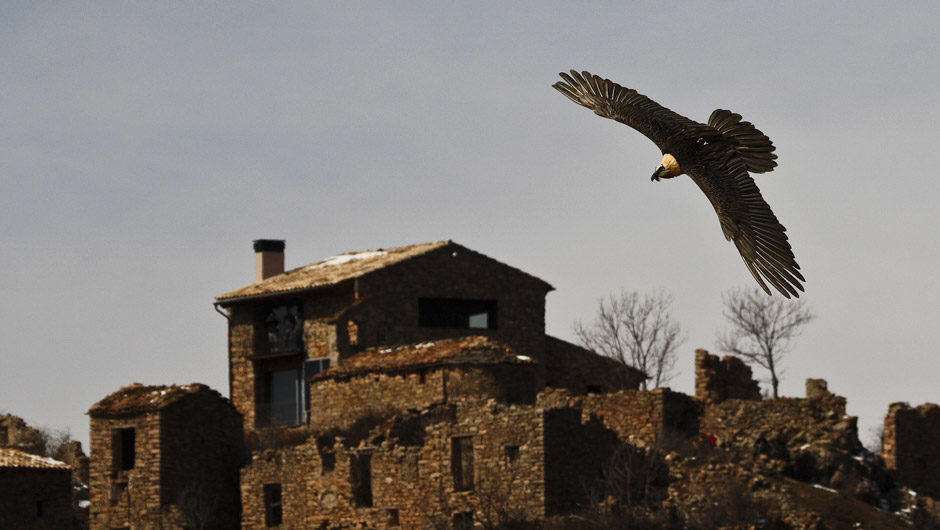 The area of ​​the Pallars is the border that marks the beginning of the highest peaks of the Pyrenees, (3000m). A place where only the species that survive the most adverse conditions, in the heights: alpine meadows, a world of rocks and eternal snows live. A little further south, we find the pre-Pyrenees, with less altitude, is a drier and sunny region, in Catalonia, where a privileged climate remembers its Mediterranean influence.

With PIRENALIA, discover one of the most impressive shows of the high mountain: the meal of the vultures on the plots of food. Pirenalia works with one of the best places in Europe to observe and photograph the scavenging birds of the Pyrenees.

Pyrenean brown bears: how many are there?

It is very difficult and expensive to count the members of such a discreet species living on a large steep wooded territory over the Pyrenees. It’s the reason why, apart from direct observations (animal, tracks or droppings), some indirect counting techniques have been set up. The most frequently used are:

Currently, there are around thirty bears in the Pyrenees.

Cantabrian brown bears: how many are there?

The Cantabrian Mountains, in the north of Spain, stretches over Castilla y Leon, Cantabria and Asturias regions. After passing through a difficult situation at the end of the 90’s, the Cantabrian bear population is slowly getting better, thanks to the work and willing of a few men and particularly to the FOP team (Brown Bear Foundation).

“The brown bear’s genetics study in the corridor between the populations and in the western Cantabrian subpopulation”, completed in 2014, highlights that the two kernels separated from each other for more than a century (western massif and eastern massif) are again in contact and protected from the genetic drift they were suffering.

A recent estimate indicates that the Cantabrian bear population counts up to 230 animals, scattered over a surface area of 4900 km2. So, as the following video shows, it is now possible to watch them. This video has kindly been lent by our colleagues from FOP.

According to some digs made on paleontological sites, the Iberian ibex, Capra pyrenaica, was hunted by prehistoric men nearly all over the Iberian Peninsula.  However, the subspecies Capra pyrenaica pirenaica, which used to live in the Pyrenees disappeared in 1999 when the last specimens died in Ordesa, while another subspecies lusitanica had already died out in 1890.